I must say, I am VERY pleased to hear about Harvey Milk (and the other recipients) receiving the Presidential Medal of Freedom over in the US, especially having just recently sat down to watch the 2008 film, Milk, and my current obsession with learning all about him. Definitely well deserved in my opinion, and just a shame that it’s taken this long! 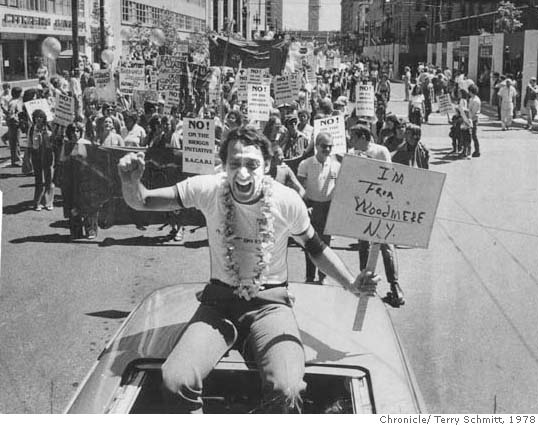 President Obama stated today that he was going to award Harvey Milk, slain San Francisco Supervisor, the Presidential Medal of Freedom. This is the highest civilian honor and Milk will be the first openly gay civil rights leader to receive it.

The President named Milk and Billy Jean King, the first prominent athlete who was openly lesbian, among the 16 recipients. Some of the other recipients include Archbishop Desmond Tutu,the late Congressman Jack Kemp and U.S. Sen. Ted Kennedy.

This decision comes just as the President is coming under heavy fire from gay-rights leaders for his lack of effort to repeal the Don’t Ask, Don’t Tell policy of the Armed Forces and his failure to undo the Defense of Marriage Act, a federal law that does not allow for the recognition of same sex marriages.

Milk was elected to the San Francisco Board of Supervisors in 1977. This made him the first openly gay public official elected in any major U.S. city. He served on the Board until his assassination a year later by former Supervisor Dan White.

The White House said in announcing the honor, “Milk encouraged lesbian, gay, bisexual, and transgender citizens to live their lives openly and believed coming out was the only way they could change society and achieve social equality.Milk, alongside San Francisco Mayor George Moscone, was shot and killed in 1978 by Dan White, a former city supervisor. Milk is revered nationally and globally as a pioneer of the LGBT civil rights movement for his exceptional leadership and dedication to equal rights.