Yesterday, I was invited along to an advance screening of the 2011 remake of classic 80s film, Footloose. 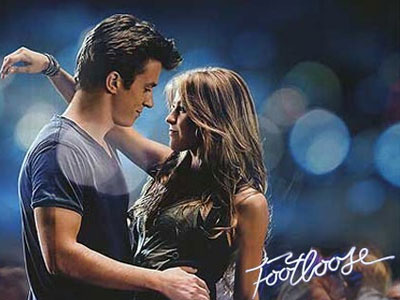 Straight off, incidentally, I’m totally calling dibs on the phrase ‘Footloose Rebooted’ – genuinely surprised that nobody else in Hollywood has come up with that one!!! If you see me mention Footloose Rebooted, then you’ll know that I mean the remake 🙂

I have had a long and chequered history with this film/musical version in the past. Whilst I recognise the 80s original as a classic, I have to say that I’ve never really found inclination to watch it more than twice…and we won’t even go into the stage show… suffice as to say, regular readers of my blog will know that musical theatre is my main passion in life, and Footloose The Musical has always been pretty tatty.

One thing that DOES always translate, however, is the fantastic soundtrack, and I have to say, I was thrilled that Footloose Rebooted decided to stick with it, reinvent it, and add its own modern twist to it – it was a fantastic connection to the original.

You may notice that I say ‘modern twist’ – that is because the new movie has totally dragged the setting up to the present day – something that I feel actually works REALLY well!

Footloose Rebooted is definitely the best incarnation of this story that I’ve seen, despite my initial horror when I heard that it was to be remade, and, whilst the 80s movie does have all the classic moments, especially compared to the Reboot, as an overall experience, I actually preferred the 2011 film.

The story plods along nicely, there’s some FAB casting, including Andie McDowell, oh, and did I mention that the chap playing Ren (Kenny Wormald) is fit as f..?! 😛

SO glad that they didn’t cast Zac Efron in the end, and even more pleased that Kenny Ortega hasn’t laid a finger on this movie… whilst both are great, this project really isn’t for either of them!

I took Max along with me to the screening, as he hadn’t even seen the original, and I was really pleased to find that he really enjoyed it as a standalone movie – seeing the initial version is not a prerequisite, and whilst fans of the 80s version will appreciate the nods back to the original, and the minor plot deviations, this doesn’t jar for the new generation.

Suffice to say, I’ve been humming Footloose and dancing around for over 24 hours now 😛

Footloose is released in cinemas across the UK on Friday 14th October, 2011 and is rated as 12A.