I am *very* excited to be able to share the news with ya’ll that Captain Planet is currently getting the green light to be made into a live action movie – here’s hoping that it goes all the way, I don’t see why it wouldn’t !! 😀 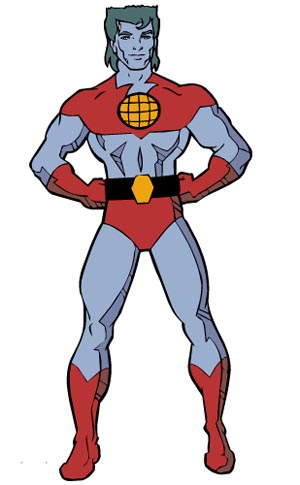 I am a huge fan of 80s and 90s cartoons, and Captain Planet, from 1990, has to be one of my favourites (I own every episode ever made!), and the theme/credits music still remains one of my absolute favourite theme songs (to the point that it is on my iPod and gets listened to regularly in amongst the ‘normal’ songs heh). I also LOVED that Whoopi Goldberg voiced Gaia!

Cartoon Network has signed a development agreement with action-adventure producer Don Murphy and partner Susan Montford and their company Angry Filmworks to develop a live-action motion picture based on the groundbreaking, environment-saving animated hero, Captain Planet and the Planeteers, it was announced today by Stuart Snyder, president and COO of Turner Broadcasting System Inc.’s Animation, Young Adults and Kids Media division (AYAKM).  The agreement gives Murphy and his company the exclusive rights to develop and package the property and advance it towards production.

Murphy and Angry Filmworks are most notably credited for the highly successful action-adventure franchise, Transformers (2007), Transformers: Revenge of the Fallen (2009) and Transformers: Dark of the Moon (2011).  Murphy and Montford together produced the upcoming Hugh Jackman blockbuster Real Steel with Executive Producer Steven Spielberg.  The company also is responsible for such action-oriented films as Shoot ‘Em Up (2007), The League of Extraordinary Gentlemen(2003), Apt Pupil (1998) and Natural Born Killers (1994).  Angry Filmworks formed n 1998.

“The messages of Captain Planet are even more relevant today,” said Snyder.  “We feel this team can bring the world’s first eco-hero to life in a powerful motion picture that is not only pertinent but entertaining.”

“We are extremely excited about bringing the good Captain back to life,” said Murphy.  “His adventures are known worldwide and he is recognized across generations.  We expect to make a spectacular series of films with the amazing team at Cartoon Network.”

“With the earthquakes, tornadoes, melting icebergs and all the other problems threatening the world right now, Earth really needs her greatest defender,” said Montford.