For my main posts on X-Factor 2009, please click HERE.

I’ve just come across this somewhat scathing article on the X-Factor audition process for 2009 and thought that I’d share.

I think that this is what we’ve all known for years, but even still, it does turn me off this new format quite a bit (and, as regular readers will know,  I was hardly encouraged by it to start with!).

What happens at an X Factor audition? 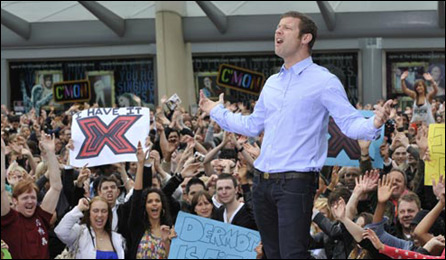 It’s 6.30am and I’m standing outside London’s O2 Arena with a big crowd of people. No, I’m not queuing up to get concert tickets – I’m lining up to audition for the X Factor.

I’d received an audition letter, which sternly informed me that anyone who arrived after 9am would not be seen, so I thought getting there bright and early would see me done by 1pm at the latest.

How wrong was I? A theme park-style snaking queue had already formed and I was seemingly at the back of it.

But everyone kept shuffling forward in stops and starts, eager to get that little bit closer to the door, so while we were moving I took the opportunity to check out my competition.

There were all the usual suspects – the flamboyant cross-dresser; the two women in their wedding dresses; and the man with a plastic chicken on his head.

I befriended the girl standing next to me, 23-year-old Kenny from London, who had brought her husband along for support.

She had never auditioned before, but her husband had filled out the application form, so thought she’d have a go.

Cunningly (or so I thought) I had brought a portable chair and Harry Potter book with me to pass the time. It drew some curious looks at first – but I was vindicated two hours later, when people’s feet began to ache and those looks of pity turned to envy.

Finally, 9am came and a warm-up man came out to greet the excited crowd.

We were told to shuffle forward again so that, instead of standing in the rather polite two-by-two line we had formed, we lost any semblance of personal space whatsoever.

The reason for this eventually became clear: We would be filmed by overhead cameras whilst we waved our hands, bounced up and down, screamed and raised our arms above our heads in a cross whilst shouting: “I have the X Factor!”

We did this for an hour until host Dermot O’Leary appeared and recorded some links to camera, followed by more cheering. This lasted another long, tiring sixty minutes and the gathered throng were now becoming bored and tetchy.

At 11am, we were finally allowed to enter the O2 Arena, but auditions were not to begin until everyone was seated. It sounded reasonable enough but, with 10,000 people to process, we weren’t all in place until 12.15pm. At which point Dermot filmed yet more links and the crowd were made to repeat everything that had just happened outside.

Unbelievably, production staff went around handing out hand-made posters for people to hold up saying things like “I have the X Factor”, “I love you Cheryl” and “Pick me Simon!”. I had always thought they were lovingly made at home…

Once again we were made to stand up, sit down, scream, wave our hands and dance. When the auditionees began to revolt (there was audible moaning and complaining) a member of the production team took out a loud hailer and told us off.

If we didn’t want to participate “then you shouldn’t be here”. One guy was singled out and made an example of. He got up and left.

Nearly seven hours after I arrived, the auditions finally began in little makeshift booths in the middle of the arena floor.

No TV judges here – we were told we’d be singing to a member of the production team. If successful, we’d receive a golden ticket, allowing us to return and sing to a more senior production member.

If that went well, we’d get to sing for Simon and, presuming we made a big enough impression (good or bad) the footage might eventually end up on TV.

Having the auditions in the open meant that everyone could see – and hear – everyone else’s performance.

There was a strange, hushed silence at first as people listened in, followed by gasps at certain show-stopping performances and cheers as people ran out waving their golden tickets.

The same songs could be heard over and over – And I’m Telling You from Dreamgirls, Bill Wither’s Lean on Me and various Alicia Keys tunes.

In the booth, someone sang a pretty off-key version of I Will Survive, yet unbelievably (or perhaps predictably) he was given a pass to the next round.

Undoubtedly he was entertaining and would make good TV, but I couldn’t help thinking that, if the TV judges told him the truth, he would be mystified as to why he had been through so many gruelling rounds of auditions.

Finally, it was my turn. I was greeted by a girl who looked like she was in her mid-20s and after a few pleasantries (no chance to give my life story or find out why I wanted to win) I sang a verse and chorus of Sam Brown’s 1989 hit Stop.

“Sorry, we don’t give feedback.”

And that was it. After 11 hours wait, it was all over in a minute.

I’m no Whitney Houston or Mariah Carey, but I can hold a tune, so I thought I had a chance of passing the first round at least. I guess I should just be happy I wasn’t bad enough to be humiliated on national TV…

As I was leaving the O2, Kenny caught up with me to find out how I got on.

She hadn’t made it through either, but I was surprised when she told me: “Next year I’m coming back and I’m going to be better prepared.”

Given the day I’d just had, I’ll think I’ll pass.