Has it really been nearly a month since I was last able to update my site?! COR!

That said, it’s been a busy few weeks and today really is the first moment where I’ve had some time to myself – I’ve worked Wimbledon, been busy with the Olympics at work, and have taken on two fish and a cat too!

He’s called Fudge, he was a nine week old kitten when we got him, making him around eleven weeks old now. Thus far, he’s been a very  expensive,  but lovely addition to the family, and he’s produced several ‘awww’ moments over the last two weeks to more than justify his place with us heh! A few choice pictures are below (most can be seen on my Facebook or Instagram):

He loves to sit on my shoulder, like a parrot, and even fell asleep there once (whilst I was walking around) – the picture above show’s how he likes to climb on Max too! He also likes it when I touch his paw pads, which I understand is quite unusual, and he keeps giving me kitteh-kisses, which are adorable! We’re hoping that he will eventually grow in to his ears! 😉

We also had two fish – they were Orandas (a variety of ’fancy goldfish’), however both have since passed on, which was a big shame. We’re currently in the process of re-starting the tank cycle and hope to start again in the coming weeks.

Wimbledon was even more of a ‘challenge’ this year, as I had to spend three weeks away from home to work it (historically, I’ve lived in London and been able to go from home each day). It was a fantastic experience, as ever, and working it genuinely is one of the major highlights of my year – though it does involve working an intense 216 hours over two weeks! I am hoping to work the 2013 Championships, but now that I am no longer living in London, I guess this becomes up for negotiation with my employer a little more! One of the things that I am loving about the Olympic games is that I am getting to watch some of the tennis (don’t get me started on the lack of Wimbledon traditions, heh) – something that I don’t often get to do for pleasure during the course of the normal Championships!

Speaking of London 2012, that’s certainly keeping me on my toes at the moment, but it’s fun to be involved with. Watching the Opening Ceremony on the BBC was something that I will ever forget I reckon – much like almost everyone else who saw it – massive kudos to Danny Boyle and his team!

I also went to Old Trafford the other day to watch the Olympic football! (Egypt vs. New Zealand, and Brazil vs. Belarus). I used to be a regular at Old Trafford as a kid, and so it was great to be back in the Theatre of Dreams after a 13 year absence! 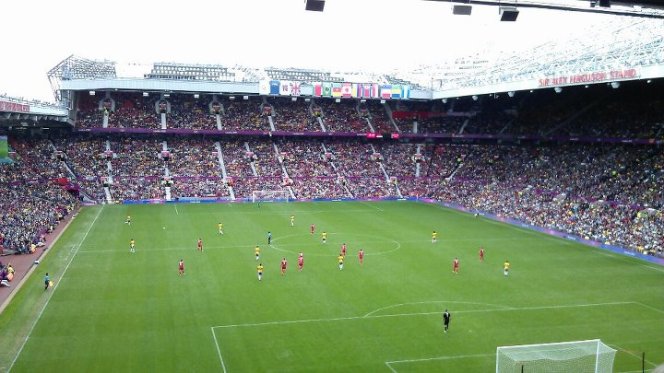 In other news, it’s my birthday next Wednesday (8th August) – totally feel free to buy me presents and stuff! 😉 heh. I especially need warm things for my Arctic holiday just before Christmas hehe! I’ll be turning 27, which shall be interesting for me, as I don’t yet feel like I’ve had sufficient mileage out of saying “I am 26”!

Max’s Mum is coming up to visit us from Bristol next week too for the weekend, which I’m looking forward to. We’ve not seen his family since we moved back in January, so it will be great to see them, and especially lovely for Max I bet!

Other than that, life is just zooming by at the usual hectic rate – I can’t believe we’re in August already!

Hope that everyone is well, and thanks for your interest in what’s currently happening in my life!