What more can I say?!

For the first time in ages, they really did look like a slick, polished and suave group and tonight was just pure magic for them! Definitely one of my favourite performances of the entire series – I even re-wound it on the PVR system thrice! Absolutely marvelous!

Plus, I think that it also helps that Aston is a major hottie too hehe! :oP

For the benefit of anybody who didn’t see it the other week, here is the JLS magazine photo from Heat! (albeit they do look a little too greased up and, for some reason which I now forget,  Aston is wearing Austin Drage‘s pants… hmmm :oP hehe) 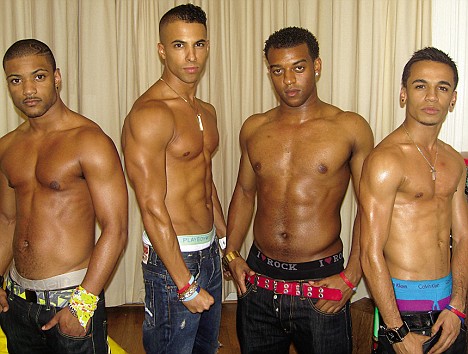 My X-Factor favourites have shifted slightly as the weeks have gone on, I still miss Austin and Laura, however I am now rooting for Alex to win and have been doing since Laura departed the show. I must say though, the final 3 are now very very strong – I am sure that they will all come out of the competition with major record label interest – and so they should!

Eoghan is definitely suited to the Busted/McFly kind of stuff (I could see him as a UK Version of some of the Disney Club kids – such as Miley Cyrus, The Jonas Brothers etc); Alex is good on Diva tracks – whether up-tempo dancing in a night-club kind of tracks, or her amazing ballads; and JLS seem to be suited towards an edgy up-to-the-minute boyband group, which we don’t really have in the UK charts at the moment!

There really would be room for all three of them in the UK charts at the moment – they’re so diverse! I do think that more than anything we need a good UK boyband in the charts, and so I would perhaps push JLS to win if only to make sure that they definitely get a recording contract so that they can have a crack at filling that void. Having said that, with the success that they’ve already had on the show, I think that we’ll be hearing a lot more of them in the weeks and months to come regardless!

If Alex were to win, I would hope that we would start to see some more of the power ballads (think Celine Dione, Dion Warwick, Whitney Houston) coming back into the charts. It’s rare to find a new track these days where the artist sings a ‘simple’ song and really shows off their voice without having all kinds of things going on in the back-ground getting muddled into their vocal etc.

I really liked the production value on Alex’s song (above) – especially when the petals started falling – note how effortlessly she turns it into a confident performance as if she’s been performing concerts for years!

Eoghan is the surprise of the competition for me, I really thought he would be one of the first to go. At times I do find some of the material that he works with a little childish and think that he could be trusted with some of the more mature stuff going forward, however for entertainment value, he certainly is a strong contender.

Anyone else think that Eoghan and Diana looked like a couple this evening?! Know that’s been a bit of a long-running debate…!!

I have to confess that I wasn’t a big fan of Diana throughout the competition (that f**king hand and the bare feet thing) plus I didn’t think her voice suited some of her songs – e.g. “White Flag” tonight – however I was pleasantly shocked when she came out this evening and performed Avril Lavigne’s “Girlfriend” – even I was dancing along at home!! I’d wish her luck for the future, and think that she would more certainly do well when she’s not being shoe-horned into a pre-themed week (which never shows off anybody’s talents really!).

So, with the race being so so so close this year, whom do you think is going to be the X-Factor winner of 2008??