As regular readers of my blog may have been aware, I was immensely looking forward to this year’s Pride event back in my hometown of Manchester. Held over the August Bank Holiday weekend each year, and currently in it’s 18th year, it truly is the social highlight of the year.

This year’s event was held between Friday 22nd and Monday 25th August – I was up in Manchester for the Friday and Saturday, before traveling home on the Sunday. Didn’t want to stay until the Monday as I knew that I’d be exhausted so wanted to factor in for a day snuggled up in bed too before heading back to work hehe.

I went up and took Alex with me, with plans to meet other London friends from our group in Manchester once we were up there. Really weird to see people that I associate with London hanging around in Manchester!

So anyways, getting to Manchester on the Friday was a little bit of a nightmare – the Virgin train that we were on managed to get as far as Watford Gap before being turned back due to there being a freight train on fire in front of us which had closed the track. Consequently, we had to turn around and go all the way back to London. Instead of taking the West Coast Mainline, which would have taken two and a half hours, we had to go up via the East Midlands from Kings Cross, to Derby, Derby to Sheffield and Sheffield to Manchester Piccadilly – which took around six hours! To say the services were busy would be an understatement! The train from Derby to Sheffield was a really old East Midlands Train service whereby you actually had to lean out of the window to open the door! It was also rather funny to watch people’s faces when they saw the Sheffield to Manchester train was only two carriages long (local service) – Londoners don’t seem to grasp the concept of trains that are shorter than eight carriages long hehe!

We arrived in Manchester at 19:00 and headed over to our hotel – the Travelodge on Blackfriars Street, just off Deansgate. Not too badly priced at all – £30 pppn. it worked out as. We also came across the most remarkable object:

We also had some really cracking views from our 7th Floor room (though admittedly not as good as our friends who were staying on the top floor of the Ramada on Piccadilly). Views included The Edge and Lowry Hotel: 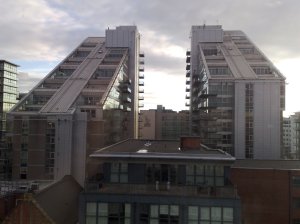 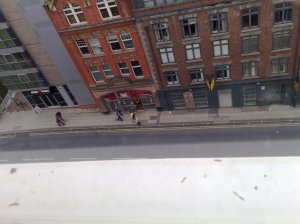 Whilst out and about in Manchester in the evening, I also had the chance to take a few cool snaps of the modern architecture which has recently sprung up in Manchester, especially around the side of the River Irwell and Spinningfields:

We dined in a restaurant called “Strada” on the Irwell on the Friday evening which I have since found out is a chain of restaurants across the country. I must say, I would rate that as the BEST dining experience in my life! Absolutely delightful and I really can’t wait to go back to them! Even better news is that their ‘London’ restaurant is in Kingston – which will be right on my new doorstep!

Having eaten, we headed down to the Pride Site to go and pick up our wristbands (sparkly green this year) and have a mooch around. I must say, Manchester City Centre was terribly quiet on Friday night! We ended up in Spirit, and boy was it great to hear the sort of music that they play in Mancunian gay establishments as opposed to the tat that is played in London!!! 😀 Carlos and co. joined us and so we had a few drinks in Spirit before heading off to Cruz 101. Getting folk to go there was easy as none of them really knew what to expect from it, and by the time they’d seen the carpeted floors, it was too late hehe!! Rather weird to see people I know from, and associate with, London against the Manchester backdrop though.

Cruz was a rather good night – we all had a good ol’ boogie upstairs, and then Edd, Carl and I went downstairs to check out the dance music floor – which was deserted. Not wanting to let that stop us, we started dancing and pretty soon the room had filled up – hurrah! We’re crediting ourselves with the success of the dance floor on that night hehe.

Urban Cookie Collective did a PA with her song “The Key, The Secret”, which I really enjoyed! Wasn’t too keen on the rest of her songs though.

We got back to the hotel around 03:30, which wasn’t too bad, though getting up at 9am the following morning was a bit of a chore!

We went for a bit of a shopping trip, and I went to H&M to purchase a few bits and bobs. We also went shopping for a watch for Alex and I came across a watch that I rather liked. Didn’t get chance to purchase it in Manchester and so I think I shall be purchasing it when I get chance to later this week. It’s the one with the green face.

We also went onto the big wheel that we’ve had in Exchange Square for a few years now. I’ve wanted to go on it since it first arrived, however this was the first time I’d been able to. The height and wobbliness scared me a little at first, however by the second time round, I was fine hehe.

After that we headed off to watch the parade – which was absolutely marvelous!!!!

We encamped over by the art gallery on Princess Street and I managed to take quite a lot of great photos (modesty should kick in soon… hmmmm… hehe). I’ve posted a selection of by favourites below, however I did take around 200 pictures of the Parade alone! The full photo set can be found on my Facebook page as it’s too large to host anywhere else. 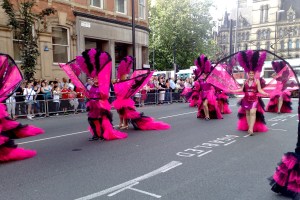 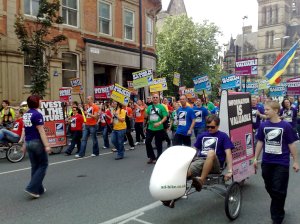 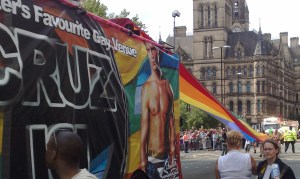 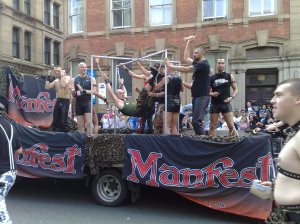 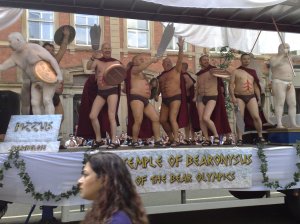 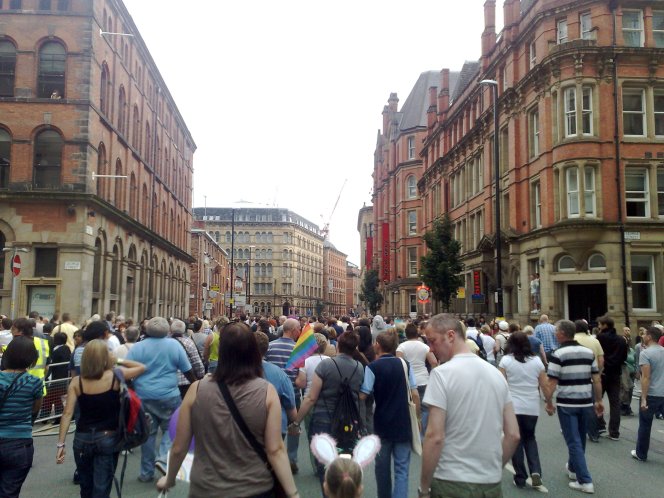 I really love how we all march up to the village once the parade has passed, it really does make it feel a lot more powerful and emotive. It’s always great to see how much support the community has up in Manchester, from the local council who facilitate so much (they even have the rainbow flag flying over the town hall every year) to the people on the streets who line the route cheering and celebrating with us.

It’s especially nice to see the emergency services being applauded, they really do deserve recognition for all of their hard work and it seems that Manchester is the only Pride which continuously does this, which is a huge shame!

After the parade, we had a quick mooch back to the Pride site, however didn’t hang around too much as it was so busy – very hard to get around as always due to the masses of people!

We met up with Carlos and co. again in the evening and went to Wagamama for dinner, before heading back to their hotel for a few drinks prior to going to Poptastic Under The Arches. At £17 to get in, I really was hoping for something decent. Having worked for Poptastic, I was sure I’d really enjoy it, but I had no idea just how much I would! 😀 Amazing – the venue itself was the best I’ve ever been in. A carpark by day, they really did manage to transform it into a fab place by night! At times, if you stood in the right place, you could hear the backing music but all of the crowd singing as opposed to the artist, which made it really uplifting. The usual mix of camp classics, coupled with plenty of Glo-Sticks, glitter and studenty types. Really made me start to miss living in Manchester. The highlight of the evening for me was dancing along to Whigfield’s Saturday Night at about 2am hehe. I danced my lil heart out (bless me hehe) and if I looked stupid, then at least I was happy looking stupid and camp hehe!!! 😛

We stayed until 03:30 before deciding to call it a night – which was a good thing really as my train home was at 11am the morning after, and so I wanted to get at least an hour or two of sleep first hehe!

The train home was via the same route as we’d come (although at least this was our planned route!), though took 7 hours and involved 3 trains and a bus – not bestest!

The one good thing about the journey home was the hour stop-off in Sheffield which we had whilst we waited for interchange on the trains. Outside the station there is perhaps one of the best sculptures that I’ve seen. There was a huge water sculpture which when you looked at it up close, made it seem as though you were looking into yourself in another world. Very “through-the-looking-glass”-y! 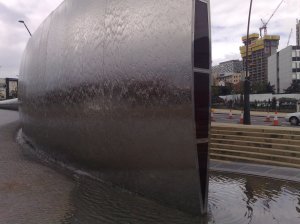 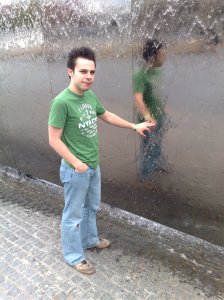 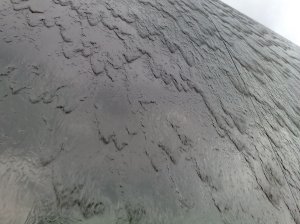 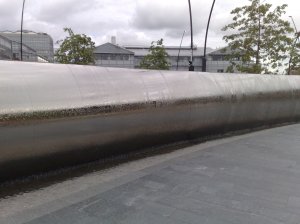 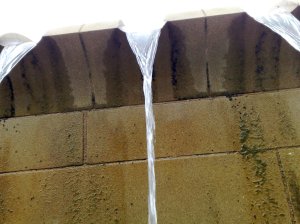 As previously mentioned, these are but only a VERY small selection of the couple o’hundred pictures that I took whilst in Manchester – Facebook carries the full selection over around 6 different galleries. Feel free to check them out, some really memorable moments have been captured and I’m really pleased that I managed to get so many of them on ‘film’.

I had an absolutely spiffing Manchester Pride this year, my thanks go to everybody who has helped to make it so unforgettable. Cartainly my best Pride ever. The only thing that would have made it completely perfect would have been if Mister Greg’s employers had given him the time off so that he could have attended, though I’m sure that he will definitely be with us next year – hurrah!

Thanks for reading xx