I don’t think there was anybody on the planet more excited to hear of the West End run of The Rocky Horror Show having Richard O’Brien on board as the Narrator. I was poised to buy a ticket as soon as they went on sale and I’ve been madly looking forward to it ever since.

I’ll be honest and say that I usually have a bit of an issue with productions of The Rocky Horror Show – it’s a show that often gets pulled out to the touring circuit and the producers usually confuse the B-Movie style as ‘cheap’ and skimp on everything, instead relying on an already jazzed up audience to carry the show to success.

Truth be told, it’s probably my favourite musical EVER! It means a massive deal to me and I’m generally scathing and unsympathetic to any abuse of the source material.

The evening started with a bit of a buzz, as everyone was being filmed entering the theatre, a real red carpet feeling – presumably as additional edit content for the live cinema screening on Thursday. It should also be added that our performance was recorded, presumably for the same reasons and to test sight lines etc. 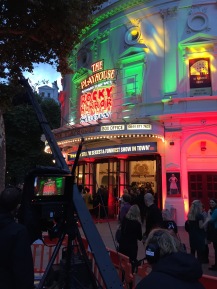 For reasons unknown, I had the only vacant seat in the house next to me. I was in Row B of the Dress. I’m not sure if someone just hadn’t shown or the seat hadn’t been released for production reasons (maybe the camera) – either way, it was odd to have the spare seat when so many outside were clamouring to buy. I’m not complaining though – this increased my dance space nicely!

This production has a fantastic West End cast, led by musical theatre stalwart David Bedella as Frank. As you’ll see from the link, the cast for the West End is not the touring cast (except for the fantastic Kristian Lavercombe who plays Riff-Raff at all locations), so I can’t comment on the touring cast I’m afraid if you’re picking up this review later on in the run.

Two cast members that also stood out in addition to those mentioned above – Ben Forster was unrecognisable from his Jesus Christ Superstar days (which I really didn’t like him for) and turned in a great Brad, whilst Dominic Andersen has to be THE sexiest Rocky that I’ve ever seen. I was incredibly flustered meeting him at stage door afterwards, though I don’t think it’s fair that people were going up to him and making crass comments and touching him inappropriately and tugging at his clothes to try to remove them. I wanted to, of course, and did in my head, but I’m married now, and not about to do a Brad and Janet myself haha!!

Talking of the cast, you really only looked to hear how face-meltingly awesome Richard O’Brien was, aren’t you? On his stage entrance, he got a massive round of applause, that must have lasted at least two minutes, if not more. He was great in the show and was especially fun when it came to the audience interaction (yes, you’re expected to shout out all the dirty bits including asking Richard how his balls are – they pretty much leave small pauses in case and encourage it). The second time now that I’ve Time Warped with him, and hopefully not the last!

As I’ve just touched on, it’s a very interactive performance. You can’t go bringing props or throw things etc, but you are allowed/expected to shout out as required – this in turn really brings the audience in to the show. You are, of course, expected to stand up and dance the Time Warp with the cast during the actual show – you don’t even have to wait for the inevitable/generally terrible forced ‘dance-party’ at the end. (I usually dislike this in a show, to be honest – Rocky Horror excepted!!). The fourth wall simply is at the back of the theatre – you’re as much a part of the production as the cast, and I love this show for embracing this.

I stayed and did Stage Door afterwards, which I don’t often do, and it was a fun sight to see so many costumed audience members stood out on Northumberland Avenue. Nothing like tourists looking confused and pointing cameras at everyone to realise how strange everyone looks in a normal context. We seemed to have a higher quota than normal of older gentlemen dressed full-out as Frank, which certainly turned a few heads from people passing by. I love that this show makes people feel comfortable to do this, I think that it’s one of the most lovely aspects of the whole show.

A few other things that I noted down to add to this post whilst I was in the theatre yesterday – I’ve found a brand new low for poor audience behaviour – dangling bare feet over the edge of the dress circle and the boxes. Fortunately this only happened in the interval, but even so. Speaking of the interval, avoid the bar, I broke my rule and bought a drink as I went on my own and was really having a mind-blowing night – £6.60 for a Malibu and Coke. I know it’s London (used to live here) and ‘West End’, but that’s shocking on top of an £80 ticket price – in comparison, it’s 8.25% of the ticket price just to have a drink! (yes, yes, I used to work in ticketing, I know the venue need to profit too!). Programmes are £5.

One thing that I would love to know, two of the most noticeable absences were everyone’s ‘Creature of the night’ voice overs from the cast in ‘Touch-A, Touch-A Touch Me’ (perhaps not possible to stage?) and also any reference to the B-Movie studio,  RKO, didn’t seem to be there, and I don’t think that I missed it?

The Rocky Horror Show plays at The Playhouse Theatre in London until 26th September, before embarking on a UK Tour. It’s worth stressing at this point, Richard O’Brien will not be on the tour! The show is also being broadcast live to cinemas on Thursday 17th September – please see the official site for more info on this. 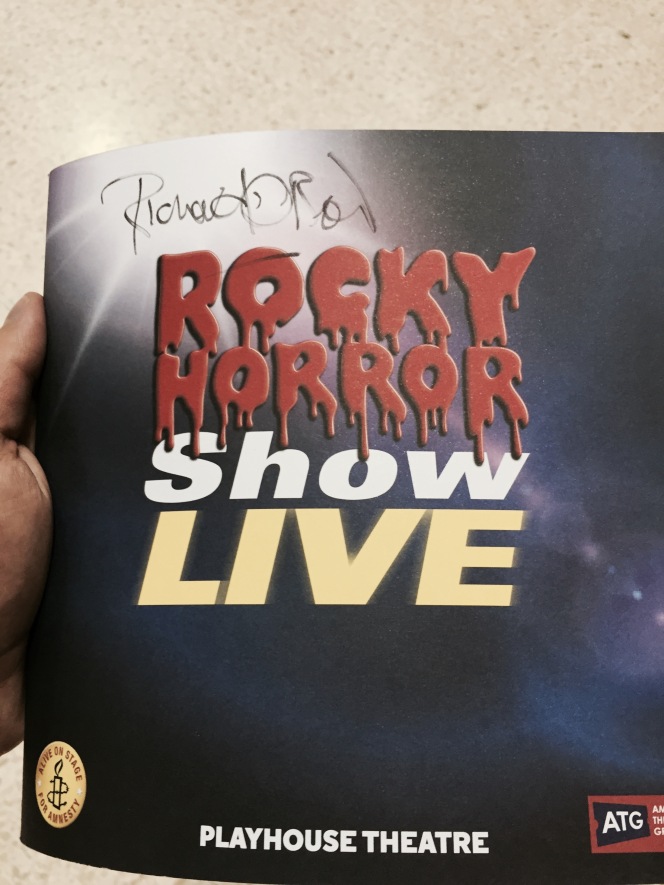