I’m SO excited, having just booked tickets to see Wicked at the Palace Theatre, Manchester, in September 2013 – and am booked in for the first night of the very first ever UK touring production! 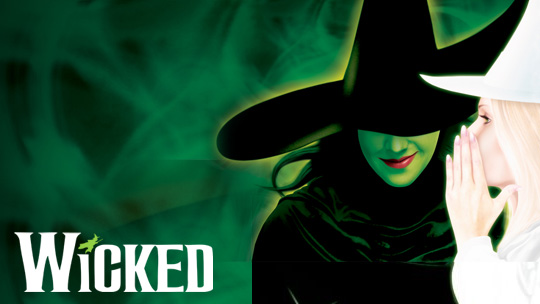 “What is this feeling… so sudden and new? … Jubilation! Unadulterated Jubilation!” 😉

I must have been one of the (if not THE) first people in the country to buy tickets for the show, and cannot wait to see it when it arrives.

Max has never seen it (shock, horror!!!) and so I’m looking forward to remedying that. I’m sure that after a year of me re-enacting it constantly, he’ll be word-perfect by the time that September comes around, hehe!

I myself have seen the show more times than I care to remember, not helped by my old apartment being just up the road from the Apollo Victoria, ha!

“Manchester Gets It First” is such a fantastic theatre initiative, and one of the reasons I decided on a return back to Manchester last year, and this show falls under that banner.

My love for the show goes pretty much back to when it opened, and, in 2006, I also did one of my first musical theatre postings about the show (bear with it, it’s MySpace, haha!).

Back in 2011, I re-reviewed the show at the Apollo Victoria Theatre, London, and this has proved to be one of the most successful/visited reviews on my site, which is no mean feat! 😀 (Even Shadow-Chancellor Ed Balls commented on how much he enjoyed my review!)

For anyone interested, the pricing brackets for a weekday performance in Manchester are:

At the weekend/premium performances, you will need to add around £2.50 on to the values above (£72.50 becomes £75.00 etc). Please note that the above are face value only, and there may be a per ticket booking fee, and a per transaction processing fee applied – you’re best to see what the ATG Tickets booking website has to say about all that.

Additionally, I make no guarantee that these prices will stay as they are etc, I am in no way connected to the production, I am simply posting a summary of what was available to me for Manchester when I booked in.

The show is playing in Manchester from Thursday 13 September 2013 through to Saturday 16 November 2013, and casting is yet to be announced.

Booking is currently open for the Manchester Palace only, and for ATG TheatreCard holders at this moment in time. General Onsale is Monday 19 November 2012, 10am.

Given the House that this is playing in, you can probably expect them to announce more major Houses in the coming weeks. If your local is part of the Ambassador’s Theatre Group, I wouldn’t be surprised if this turns up there for a spell or two (no pun intended!!).

My advice on tickets for Manchester, £72.50 will give a fantastic view, as this is pretty much centre front stalls, and if you can afford it, I’d say do it!

I would be initially hesitant about booking £52.50 tickets in the stalls, as they don’t start centrally until row K back. Instead, the front row of the Dress Circle is priced at £52.50, and would offer a better view, in my opinion – there is no ‘premium seating’ in the Dress Circle. The leg room is a little limited in the Dress, but if you book quickly enough, you can always grab an aisle or two! I’ve gone for the front circle for this show.

All that said, the £52.50 tickets in the stalls should still be great if they do take your eye – just with my being fortunate enough to have had the added luxury of a decent inventory, I was able to be slightly more choosy than I would have been had I been looking for ‘best available’, and the sides at the Palace Manchester are not so restricted/awkward, as they are in a typical West End house with more fiddly seating arrangements/a less ‘open’ stage front. 🙂

Should you have Spotify, you can play the Original Cast Recording directly below (go on, you know that you want to!)