I’m just back from a musical that, secretly, is one of my absolute favourites! 😛 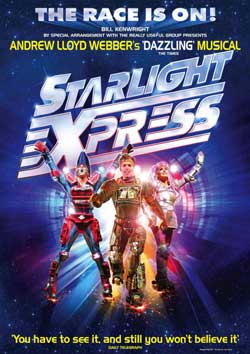 Starlight Express (StEx) is currently embarking on a UK wide tour, presented by Bill Kenwright, and directed by Arlene Phillips, and I have to say that it’s GREAT to see this show back on the UK Touring circuit.

StEx was one of the last shows that I saw in Manchester (2004 – 2008 UK tour) prior to my relocation down to London and the West End, and it’s great that I got to see it again in Manchester not six months after having just moved back!

Now, I’ll freely hold my hands up and say that this is definitely something of a ‘daggy’ musical, and one aimed at the family audience (which has a nice throw back to the story of how it was conceived), and, additionally, I am a bit of a train geek, so for me, it’s a fantastic bit of escapism. I may be 26, but I’m still able to pretend to be a train like the rest of them, hehe!

Admittedly, my advance thoughts on tonight centred around the fact that I’d not been a fan of the adverts that have been airing to ‘show off’ the show, as they’ve, frankly, looked a little cheap, and I was interested to see in what incarnation that the show would appear in, as it’s infamous for constantly being re-written, with songs coming and going with each production.

Well, tonight was no exception, and though I missed a few classic songs (such as ‘Next Time You Fall In Love’ – a FAB song – replaced by ‘I Do’ – a song written for this new production by ALW’s son, Alistair Lloyd Webber), I did like the songs that were substituted in, and, surprisingly, I found that I also enjoyed the drum and bass that has been added to many of the other songs, despite initially bristling at them (imagine a nightclub that plays only Andrew Lloyd Webber funky house remixes… ha!).

The cast are fantastic, and tonight I totally lost my musical heart to Poppa (played by Lothair Eaton, who has been playing the role worldwide for decades!), and a massive shout-out also has to go to the ever AWESOME Mykal Rand as Electra (who was SO Grace Jones in his character, it was sensational); I was completely transfixed and in open-mouthed awe at his performance, in what is totally one of my favourite roles in musical theatre!! 😀

It was good to see that the audience were still wow’ed by the 3D elements of the production (the same one from the ‘Starlight Express 3D tour’ from 2005), there were lots of shrieks and screams – and only at one point is it blatantly obvious that they’ve not re-recorded it – but it still works fantastically. Stage management wise, my only gripe was that I could frequently see in to the side wings, and see the stage hands on stage propping up/ballasting the ramps, which ruined the magic a little at times. 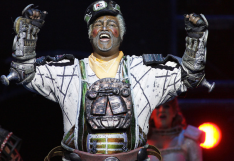 Audience wise, I think we had a very cynical audience, at the start, however, by the interval, we had people (and yes, I mean adults more than kids!) screaming and cheering Rusty on, in addition to old grannies at the front waving and whooping, so if the audience atmosphere seems a little limp at first, stick with it, and it very quickly ignites from Poppa’s first song onwards.

Absolutely loved this production, and it’s just a shame I’m off to Wimbledon for the tennis this week, so I can’t go back and see it again, to be honest!

So pleased that they kept Crazy in this time (if I recall, they pulled it in 2004), and it’s totally one of my favourite songs in the realm of musical theatre, for reasons I can’t quite explain, heh!

(please note: this is not my video, I’ve sourced it on YouTube and do not condone recording theatrical events without relevant permissions!).

If you’re looking for an amazingly fun night out, that will have you up and dancing in the aisles at the end (I totally out-sang the entire cast during the mega-mix, and have also sang the whole show right through on the journey home, hehe), then Starlight Express is TOTALLY for you – get your skates on, and book tickets!! 😛

Oh, and remember up at the top of this post, I mentioned that I could totally pretend to be a Starlight Express train…? This is me, four years ago (age 22), doing Light At The End Of The Tunnel, in my front room, with a shoe-box on my head, and a phone light for a lamp. STAGEY AND PROUD, haha!!! 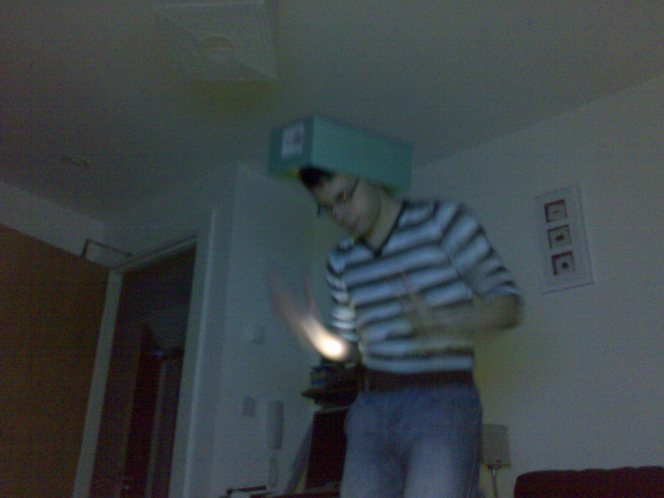