Regular readers will know that I am something of a TRON franchise obsessive, (for example, I’ve seen TRON: Legacy about 20-25 times in the last 12 months, and it is one of my all-time favourite movies!), and so I’ve been eagerly awaiting the debut of TRON: Uprising for the last year or so!

For anyone unsure of what TRON: Uprising is, here’s a trailer and synopsis:

Beck is a young program who becomes the skillful leader of a revolution inside the computer world of The Grid. His mission is to free his home and friends from the reign of the villainous Clu and his henchman General Tesler. Beck will be trained by Tron – the greatest warrior the Grid has ever known. Tron will not only teach Beck the fighting and light cycle skills he needs to challenge this brutal military occupation, but he will be a guide and mentor to him as he grows beyond his youthful, impulsive nature into a courageous, powerful, strong leader. Destined to become the next Tron of the system, Beck adopts Tron’s persona and becomes the archenemy of General Tesler and his oppressive forces.

Having just watched the first episode, I have to say that the wait was WELL worth it, and I absolutely love Uprising! The mix of a modern-anime style animation and CGI (done by Japan’s Polygon Pictures), has worked REALLY well, and I love that Joseph Trapanese, who arranged the Legacy score for Daft Punk, is still on board to score the Uprising soundtrack (itself an awesomesauce echo back to the iconic Legacy soundtrack). 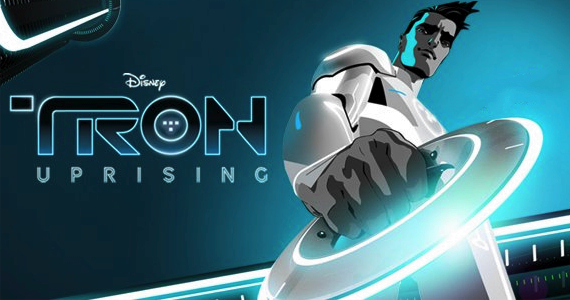 Disney are reported to have ordered 18 episodes of Season One, which I think shows a massive commitment on their part to make the franchise successful, and I give them MASSIVE kudos for running with this as they have. That they’ve managed to keep the iconic Bruce Boxleitner (who has played TRON right from the very start) attached to this show is fantastic, in addition to being able to attract Hollywood names, such as Elijah Wood and Mandy Moore (who feature very well in this, despite the reservations many had), in addition to well-known voice artist Lance Henriksen, whose deep commanding voice is nothing short of spine-chillingly atmospheric and awesome! All in all, the signs for Uprising are very positive I think, and this is echoed by the names that they’re managed to bring on board with what is essentially, a mini-series for the Disney XD!

I love, however, that the story is so dark, and that you actually get to see characters die (de-rez), which I think shows that Disney is perhaps aiming for the fanboys with this series, as opposed to its traditional market, perhaps in competition with the recently refreshed Thundercats series that’s been showing on rival channel, CNN, over the past year or so. Additionally, this story slots in to the space between the original TRON movie, and TRON: Legacy, and, with Clu sidelined to the periphery, is also without audience reference point, meaning that it could very plausibly have been a story of attempted revolution and retaliation that occurred in the years in between. I’m very excited to learn more about different aspects of The Grid, and it adds a new depth to the TRON Legacy film when you watch it back I feel. TRON Legacy is great, but you get no feel for the struggle and the need to get rid of Clu. Uprising starts to fill this void nicely.

I know that I for one am going to be hooked on this, so why not have a watch of the first episode,  and then come back and let me know what y’all think via the comments box?! 😀