It’s not very often that I resort to a more serious style of blogging on these pages, however, the news last night that the US Supreme Court had failed to step in and act against the god-awful Westboro Baptist Church and their disgusting picketing of the funerals of US service men thoroughly shocked and appalled me!

Forgetting, for a moment, their vehemently anti-gay message (which, as a gay man, I find totally deplorable of course!), can you imagine if this band of hillbillies rock up to your son’s funeral – him having just prematurely died at a young age and in dedicated service for the freedoms of his country – and this bunch of clowns show up and start protesting?! It must be TERRIBLE for the families of the person who has died, especially as they seem to do it so indiscriminately. It absolutely disgusts me that someone who is defending his country and gives his life to defend it’s very constitution is also then royally shafted by enemies from within, hiding behind that very same constitution.

Fred and Margie Phelps should be absolutely ashamed of themselves in my opinion – for we gays, they’ve been on the radar for an awful long time now, and their message of hate towards the gay community is totally unacceptable. The methods that they use for disseminating their bile are thoroughly deplorable and I think that America really does need to try to reign in the far right and the religious zealots that we associate all too freely with America (and don’t even get me started on the American preachers who are systematically turning Africa into a violently homophobic continent!!).

I am all for the freedom of speech and whatnot, but there absolutely has to be limits to it, and I think the US needs to review its legislation and bringing it more in to line with that of the UK and the anti-hate laws that we have over here. Yes, they seemed a little odd and over-bearing at first, but actually, in practice, they can work very well!

I’ve actually not been this angry over a news story in quite some time, and I really do hope that something is done in Congress following this huge injustice to the memory of all those who are serving in the US army who are no longer with us, and who have had their funerals, their last chance to say goodbye, hijacked by some absolute loonies, who have no reason to be there other than to randomly cause trouble! 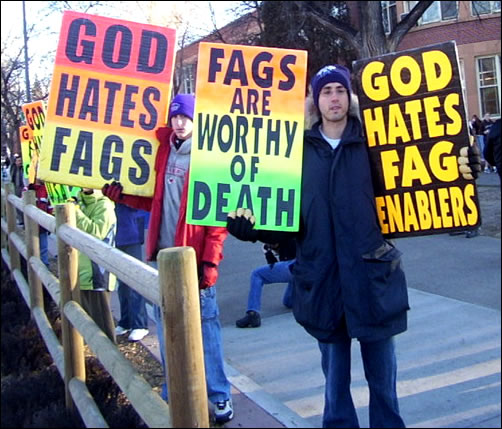 The US Supreme Court has ruled an anti-gay church has the right to picket military funerals under the US constitution’s free speech protections.

The court ruled 8-1 for the Westboro Baptist Church, throwing out an earlier $5m (£3m) judgement awarded to the father of a fallen US Marine.

Members carried signs denouncing the US for its tolerance of homosexuality.

“What Westboro said, in the whole context of how and where it chose to say it, is entitled to ‘special protection’ under the First Amendment, and that protection cannot be overcome by a jury finding that the picketing was outrageous,” Justice Roberts wrote on Wednesday for the court.

Church members, led by the Reverend Fred Phelps, have picketed outside numerous military funerals to draw attention to their view that US military deaths in Iraq and Afghanistan are punishment for the immorality of Americans, including tolerance of homosexuality and abortion.

“Speech is powerful. It can stir people to action, move them to tears of both joy and sorrow, and – as it did here – inflict great pain,” Justice Roberts wrote.

“On the facts before us, we cannot react to that pain by punishing the speaker. As a nation we have chosen a different course – to protect even hurtful speech on public issues to ensure that we do not stifle public debate.”

Lance Cpl Matthew Snyder was killed in a Humvee accident in Iraq in 2006 and his body was returned to the US state of Maryland.

Members of the Westboro Baptist Church travelled from their base in Kansas to the funeral site, alerted local police of their planned protest and picketed peacefully, on public land, in accordance with police guidance.

For about 30 minutes before the funeral began, the protesters marched with signs reading: “Thank God for Dead Soldiers”, “You’re Going to Hell” and “God Hates the USA/Thank God for 9/11”.

Mr Snyder saw only the tops of the group’s signs, according to the court record, but saw what was written on them on a television news broadcast later that evening.

He then filed a lawsuit in March 2006, accusing the church of intentionally inflicting emotional distress and won $11m at trial in 2007, later reduced by a judge to $5m.

A federal appeals court in Virginia threw out the judgement, saying the constitution shielded the church members from liability. The Supreme Court on Wednesday agreed.

In a dissent, Justice Samuel Alito wrote the First Amendment to the constitution does not grant the right intentionally to inflict emotional distress on private figures.

“Our profound national commitment to free and open debate is not a licence for the vicious verbal assault that occurred in this case,” he wrote.

“In order to have a society in which public issues can be openly and vigorously debated, it is not necessary to allow the brutalisation of innocent victims.”

Following the ruling on Wednesday, Margie Phelps, Mr Phelps’s daughter and the lawyer representing the church, told reporters that the case “put a megaphone to the mouth of this little church”.

“We read the law. We follow the law. The only way for a different ruling is to shred the First Amendment,” she added.