For Part One, you may wish to click here.

So, I just wanted to update my blog a little to show that I am still around – it’s been a manic few weeks and I’ve not really had any time to be online, let alone maintain my blog.

Working at The Championships 2010 was a right blast. Yes, I was getting up at 04:30 and getting home and going straight to bed at 22:30, but that was all part of the fun!  I’m already missing t’Bunker and the random routines Lucy and I got into! (though I am not missing Crimewatch Roadshow heh). I was fortunate enough to meet some new fab people who we’d hired in whilst working at The Championships, and hopefully I’ll be invited back to work on the 2011 Championships too.

On the Thursday night, we went out to The Common Room in Wimbledon for a bit of a staff drink. I got rather merry and didn’t end up getting home until 02:30am – not best with a 04:30 start the next morning!! To make matters worse, the Friday was the last day that we were all together, and so we had to pose for this staff picture at 9am in the morning – so I look terrible! Although we were all a little hungover, I think I seem to have come off looking worst heh!

Speaking of hangovers, we had access to the Players Lounge at the AELTC, so I managed to get a tennis superstar’s version of the classic McDonald’s hangover breakfast – I cannot even begin to tell you how fit this was!!

Also, it was a great chance to look smart on a daily basis (hurrah!). I felt so scruffy once The Championships had finished, and I had to go back to my skivvies for work!

The below photo was taken around 5am in the morning; a time when it hurts to smile!

I also bought a waistcoat for the AELTC Staff Reunion party, which I was very pleased with! First time socially wearing a waistcoat, and I think that I may have started a new fashion thing for myself – certainly I would forgo a suit jacket for a waistcoat in an office environment. You’ll have to forgive my mucky mirror on the first picture – had no time for housework! 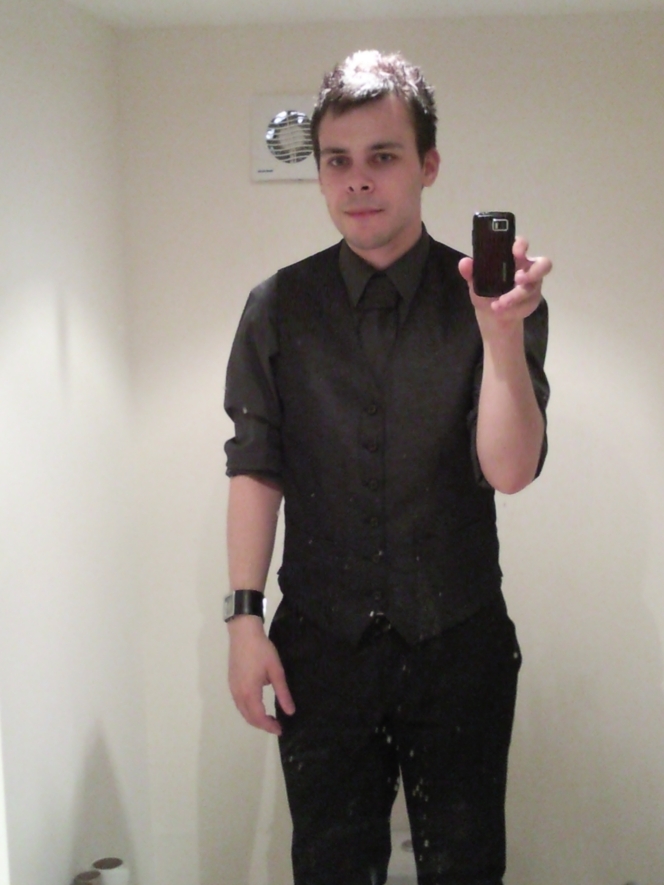 Unfortunately, I didn’t get to see all that much live tennis, however I did get to watch most of it on the BBC, and it was great to finally be able to get into tennis as much as I’d wanted to in previous years. Highlight games for me would include the epic 70-68 Isner – Mahut match, as well as the late night thriller between Djokovic and Rochus on Day 1 (Mon 21st June). 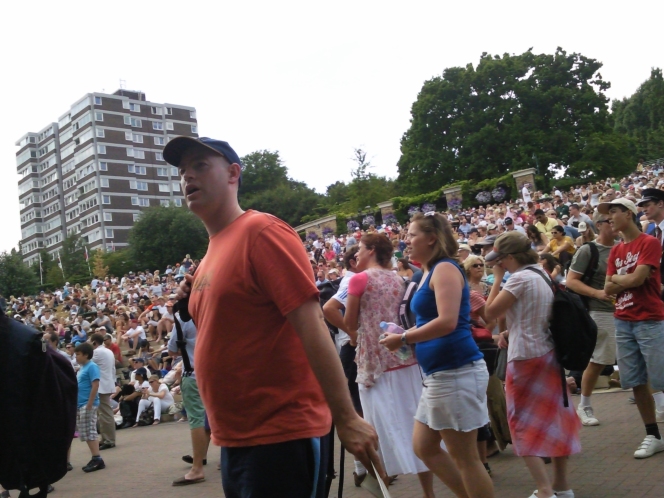 The tennis bug is such that I’ve even started playing more with my Wii! 😀

I’ve also loved just how much wining and dining goes on around this event – I seriously have never eaten so well in my life! Having had all my food bought for me for the last two weeks, plus the numerous social functions, it really was a huge culture shock to have to go into a supermarket the other day to buy some lunch heh!

I have eaten so many strawberries and cream bowls that it is unreal!

Most of the functions are now over, I just have one more dinner to attend, right at the start of August and just before my birthday – I can’t wait, I’m really hungry already!

Three songs that will always remind me of Wimbledon 2010 – Usher feat will.i.am –  OMG (pretty much everyone, was singing this!), The Beatles – Hey Jude (we had a chap called Jude working for us, so I heard this being sang, a lot!) and Kings of Leon – Sex on Fire (fab point during the staff night out to The Common Room).

Of course, it wasn’t all fun and games, there were some very stressful days, and times where I felt awful, however on balance, this has been one of my favourite working experiences that I have ever had, I’ve learnt a lot, and I am very much looking forward to 2011! 😀