So, today my hometown of Manchester awoke to a gorgeous blanket of snow – the lucky devils!

It’s such a shame that it happened today, mainly as I’m going to be there next week!! A snowy Manchester would have made my year! (yes, I know we’re only a few days in heh).

It’s not all bad, as today has been a wonderful day for viewing photos online, especially ones from Manchester; the snow really does bring out the best in everyone’s cameras.

I don’t know why I’m complaining (maybe as it’s less picturesque); there is snow forecast for London, and for it to be much more severe than it was up North. We’re forecast five days of constant snow, whereas Manchester just has the one day, with ours starting right about now. There is a growing sense of dread one feels!

This morning, you could tell that the freeze was coming by looking at the fountains in Trafalgar Square as every time they freeze up, you just know that a snow is coming! 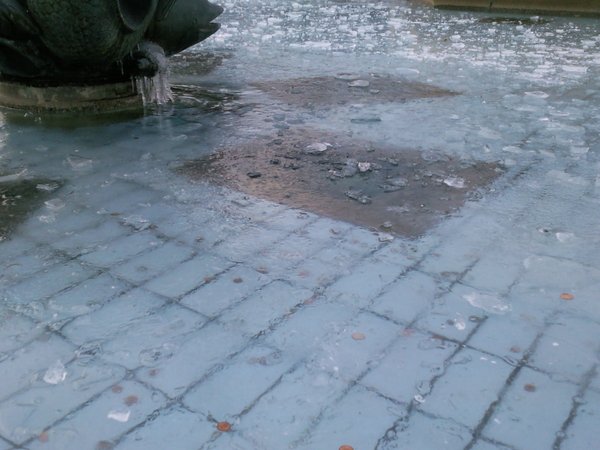 I especially love all of the ‘floating’ pennies – that is pennies that have frozen at different levels on the water. It’s almost like an art installation!

Like everyone, I am hoping for a snow day, though with me being off work tomorrow anyway, here’s hoping that it lasts until Monday! 😉