I was lucky enough to get an invite to go and watch this and, having read/studied the play back at school/college, I jumped at the chance.

“When Inspector Goole arrives unexpectedly at the prosperous Birling family home, their peaceful dinner party is shattered by his investigations into the death of a young woman. His startling revelations shake the very foundations of their lives and challenge us all to examine our consciences.”

All in all, I enjoyed the production, though I did take issue with one or two points – I thought that the members of the cast outside of The Birlings and Inspector Goole were a little unnecessary and added confusion to the mix more than anything else. I also thought that there was a fair bit of overacting, especially from Nicholas Woodeson, playing Inspector Goole, frequently losing his temper and screaming at The Birlings, which I found inappropriate and ineffective.

For me, I most enjoyed the performance of Sandra Duncan as Mrs Burling – she commanded the stage whenever she was on it, and was without doubt, perfect for the role. I do feel that the role of the Inspector should have been cast with a stronger gentleman if I am completely honest. In the interest of fairness, I should add that the Press seem fairly mixed on their reviews of the quality of performance turned in by the actors, with some proclaiming that it is second to none, and others panning elements of it. 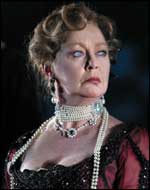 The set is fairly basic, but it works very well – especially at curtain up, that was a production in itself! The combination of the music, rain and the smoke really did add some ambiance to the opening moments, and I thought that this was very well done. I also liked the house collapsing around them and thought that was very well staged.

The play is 1 hour 45 minutes in duration, and is without interval. I must say, the time whizzed by!

I’d recommend for anyone considering seeing the show to go and see it on its West End (or indeed UK touring) run. This year is all about the West End play, and “An Inspector Calls” is a very welcome addition to the range of drama currently on London’s stages at the moment.