… though I’m sure, declaring Meat Loaf to be my favourite music artist (possibly after Queen… it depends on the day you ask) is probably not original enough! That said, I’m sure that my saying this will surprise quite a few of my friends!

Today I purchased a copy of MeatLoaf : 3 Bats Live which was his 2007 series of concerts primarily to promote Bat Out Of Hell 3 (as well as Bat 1 and 2). WOW is all I can say!

I’ve been a huge Meat Loaf fan since about the age of ten, and twelve years on, his songs still sound fabulous to me. I can still vividly remember playing my stepfather’s vinyl collection and singing along whilst my parents were out  – those were the days!

The concert itself was amazing. Very well staged, I liked all of the stories that came to the stage along with the songs themselves and it was great to see Meat Loaf back on the road again. (Incidentally, he’s currently selling for a UK tour this summer which I REALLY want to go to – hint hint anyone? :P)

I must say, I did think his vocal was a little squiffy on some of his older stuff, but once he gets to the Bat 3 material he is definitely on top form. As the songs from Bat 1 are 30 years old, and Bat 2, 15, perhaps it’s just that his vocal style has changed a lot since recording them and that I am not used to hearing him ‘now’ except for the Bat 3 songs due to them being recorded in recent times… but I still don’t think that this was why as, if anything, the Bat 3 songs are a little rockier and harder to sing than some of his old stuff!

Either way, it was AWESOME!

I LOVE all of the artwork surrounding Meat Loaf’s albums and the latest stuff is no exception! I also love the way that Jim Steinman wrote all of Meat’s songs so that they have a piano in them – the piano is my absolute favourite musical instrument, and there’s nothing better than hearing someone hammering on the keys with a huge amount of attitude as they do in a Meat Loaf song!

Clips below are mainly taken from proper music videos as there are not really many good quality performances from the 3 Bats Live tour on YouTube [which I guess is a very good thing!].

Yes, I know I went a lil over-board with the videos, so sue me! 😛 hehe. I deliberately didn’t want to include Bat Out Of Hell as no music video was ever made of the track and everything on YouTube is either a poor imitation or else a live clip of terrible quality which doesn’t do this masterpiece justice! 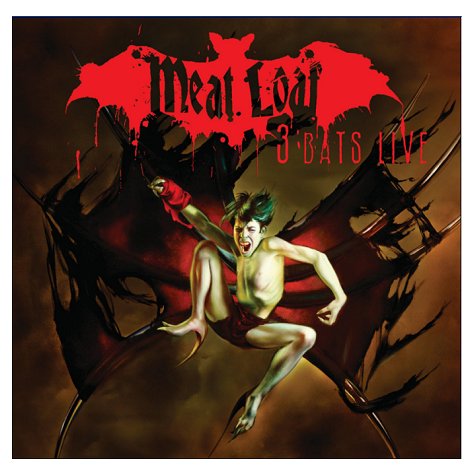 The DVD and CD are both available to buy from most record shops and I really would suggest that you purchase a copy! 😀 Annoyingly it seems I paid twice what the online retailers are asking for it, so definitely BUY ONLINE!

Oh, and as a brief (but wholly surprising) end-note if I ever was inclined to take a wife (which lets face it, probably won’t be ever!). then Aspen Miller would be she!

She’s currently Meat Loaf’s lead backing singer (though has a wide background of musical theatre experience and even Andrew Lloyd Webber’s a huge fan) – so not only is she very pretty and seems to have a fab personality/attitude, but she’s got all of my interests too! My Stu’d better watch out!!! hehe 😛