A classic love story blown onto the London stage. 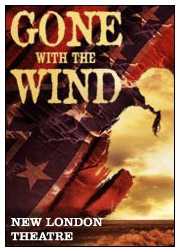 Unfortunately, perhaps the first thing that springs to mind when you think of this production is the time-span that you, as an audience member, need to be willing to invest in it. Having never been able to sit through the entire 1939 film in one sitting, I was expecting for this to be either a rather reduced production, or else extraordinarily long; all or nothing as it were. As it stands, the production itself is pretty much the exact same length of the film, at 3 hrs 45 minutes. I happened to be speaking to one of the principal cast members on the bus home the night before and she informed me that twenty minutes of the production had already been cut due to concerns about the length of the production. I am not entirely sure that the West End audiences can cope with a performance that ends at around 23:30 each evening, especially those with young children – and I did notice a fair proportion of people slipping out of the theatre around the 22:00 – 22:30 mark.

Although comments about the length of the production were the main thing on people’s lips as they were leaving the theatre, one would hope that last night’s audience are now suitably adjusted to this ‘culture-shock’ and are now turning their attention back to what they saw on stage and have formed an opinion on the production itself as well.

My opinion of this production is generally a positive one. As one would expect with a production of such a length, there are occasional lulls in the action/story every now and then, but there are plenty of high points too which I felt carried the production over-all. I felt that the original story was done justice by this production and that it suited this adventurous new medium of the West End stage, and the Gone With The Wind fanatic in front of me was clearly (and vocally!) impressed!

The stage itself at the New London is quite unique for a large London Theatre and I felt that the stage design for this show adapted well to the theatre. I wasn’t a huge fan of the continued usage of cast members parading through the audience, although again, I can see how this was necessary to retain the production values of the show and the challenges of working to a stage that is semi-in-the-round.

The production on this show was fairly subtle and nicely done. There aren’t really too many wow moments (except for when they set fire to items on stage), however with a continually changing set and a barrage of props and costume changes, coupled with a rather large and talented cast, there’s certainly enough going on to keep one captivated and focused on the story.

Regarding the cast, I was pleasantly surprised I must say. I went into the production having already seen several theatre shows with Ray Shell (Pork) and Jeff Shankley (John Wilkes) and so because of this I was expecting a strong cast from the outset, though I think that Darius Danesh (Rhett Butler) excelled himself with his fantastic accent and stage presence, as did Jill Paice (Scarlet O’Hara) who provided most of the drama throughout the production. My favourite character however, was Mammy played by Natasha Yvette Williams, who had great stage presence and a powerful set of lungs on her to belt out her songs where appropriate.

On the subject of the songs, I didn’t find them particularly memorable or engaging and saw this production as more of a drama which happened to have a few songs in it. Of course, there were one or two fantastic ones, though I feel that this production would have worked equally as well without any musical aspect to it at all.

In summation, I found this to be an enjoyable well-meaning production which will hopefully remain in the West-End for a good number of months, which it certainly should be able to do, providing that the theatre-going public continue to be willing to invest four hours to watch it. Good press reviews will be key to drawing in theatre-goers and getting people over the ‘but it’s 4 hours long’ thing!

Frankly my dear, I don’t give a damn.