I’m writing this from my nice hotel suite on 42nd and 47th – a few short blocks away from the Belasco Theatre, home to Hedwig, her Angry Inch and now, my heart!

Seriously, I've seen EVERYTHING and @HedwigOnBway is the BEST thing on the planet! Review to follow http://t.co/hKyZvJpk1I #fb

Seriously though, I’ve been a Hedwig obsessive since I first saw the movie version many many years ago. In fact, Origin Of Love is probably my most favourite song ON THE PLANET – the story/imagery is just so beautiful.

I’ll admit that I’m not much of a Dexter follower, but I was very much aware of Michael C. Hall and the fantastic talent that he brings.

Lena Hall is outstanding, stunning, and engaging- everyone involved in the production does a tremendous job. 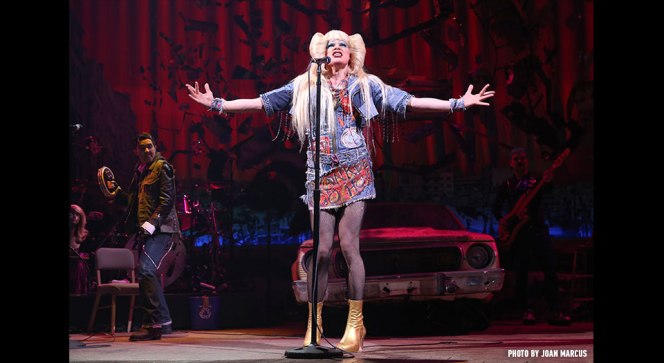 was on a Sunday show (3pm – 5pm) and absolutely got as much energy as a Saturday night performance. I was in seat A2, which I heartily recommend, (un?)fortunately the opposite side to the car-washing and spitting shenanigans, though still close enough to see the sweat dripping from poor Michael C. Hall’s back during a less chaotic moment. If you can get on the very front row the recompense that you’ll get for a potentially stiff neck is the potential for souvenirs or a special kiss with Hedwig!

The show runs at about two hours and doesn’t do an interval, all of the cast/band, including Michael, are on the stage for the full duration of the show – which is pretty awesome/shows a real energy to it.

Staging is great, with a really versatile set, and the lighting was nicely arranged. Sound wise, it melted my ears off, that was THAT awesome!!

Huge standing ovation at the end (Imagine these are ‘guaranteed’ nightly – I was in such haste to get up and lead the ovation that I promptly slipped on my Playbill and fell straight back into my seat – rather comedic).

I bought a signed poster (supporting Broadway charities) for $100 – most Brits will probably be surprised to hear that they were selling tens of these – people couldn’t get enough of them. I’m not usually one to visit the merchandise stand at a show, as it’s usually over-inflated rubbish, but not so for Hedwig! 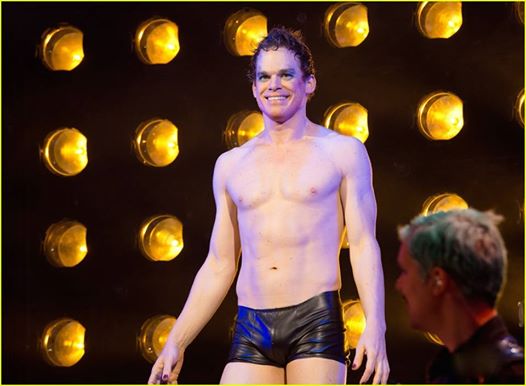 I really really cannot endorse this production enough – it was everything I’d hoped it would be AND MORE!

Michael C. Hall continues to star as Hedwig until January 18th 2015, when the show’s original creator and original Hedwig, John Cameron Mitchell returns for an eight-week stint, starting January 21st 2015 – as if this show couldn’t get any more awesome! Hedwig plays at the Belasco Theatre, NY, and tickets are available through the usual ticketing agents, and it’s well worth a quick check of the tkts booth first if you don’t mind where you sit – for true fellow obsessives, the ‘full price’ is more than worth it to guarantee yourself a ‘decent’ seat – assure you it’s worth every cent!