If you’ve been coming to my site for a number of years, then doubtless you will know that I am absolutely OBSESSED with the musical Hairspray!

Back when the show was in the West End, I went to see it a good ten or more times, and was also very fortunate enough to get to know Adam Price, through my reviewing, who played Edna every Monday evening, and when Michael Ball had a night off. This led to me being able to go backstage and enjoy seeing the show really close up, as well as getting to spend some time around Edna’s dressing room, which I have to say, only cemented how special this show is to me, and how protective I am over it!

With all this massive baggage on my mind, it was with a little trepidation that I donned my polka dots, beehived my hair and whizzed back to the 1960s (with a little bit of help from the Metrolink) for the very first night of the 2013 UK Tour, at the Lyric Theatre at The Lowry, Salford. 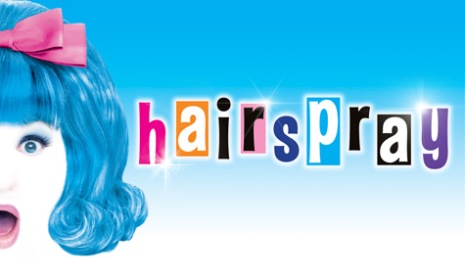 I’m not going to beat around the bush with this one at all – simply, the show remains a massive feel-good spectacle, and all of the West End values (largely, I believe, thanks to a tight show license control from the US) have been preserved as they were when the original UK production opened in London all those years ago.

Absolutely, it is still, without question, my favourite show!

Cast wise, I was a little apprehensive going in to it, as there were a few names that I’d not associated with musical theatre previously and so that initially added to the (unfounded) worry I had that the show wouldn’t be on par with previous productions that I’d seen.

Freya Sutton as Tracy Turnblad, absolutely proved her worth tonight. This role traditionally goes to someone who is experiencing their first big break in musical theatre, and gosh, you wouldn’t know that this was her first professional outing – she was WELL up there with all the previous performers that have gone before her! A fantastic vocal and she really did the character well – it was hard not to fall just a little bit in love with her by the end!

Mark Benton as Edna was simply fantastic! Having seen Michael Ball do the role so many times (along with my good pal Adam), I thought that the character’s vocal sound slipped a little at times, however he clearly threw himself right in to the role, and I really enjoyed his turn as Edna.

Luke Striffler as Link Larkin made me swoon, terribly! I fell in love with him a little back when I saw him in Avenue Q, and I fully appreciated the benefit of my front row centre seat in the stalls when it came to some of the poses that the character found himself in 😛

Paul Rider as Wilbur proved to be very enjoyable, and won me over in a role that I don’t normally enjoy so much.

Marcus Collins was fantastic as Seaweed, and it being the first time that I fancied the actor in the role, it opened up a whole new dynamic to the show and story for me, despite the number of times that I’d seen it previously. His vocal and breath work is great, though it is his dancing which, true to the character of Seaweed, really gets him the spotlight moments! His fan club in the audience were very vocal and really added to the already electric atmosphere!

Sandra Marvin is someone who I have followed for a number of years, and she blows me away every time that I see her as Motormouth Maybelle, having appeared in all of the UK productions to date, including the West End. Tonight was no different, and I had goosebumps from the first through to that last magic note of ‘I Know Where I’ve Been’. Vocally, her character absolutely makes the show, and without a powerhouse like Sandra Marvin in the role, I couldn’t even comprehend how the character would work.

Lucy Benjamin as Velma Von Tussle was something of a revelation for me, having grown up with knowing her only as Lisa from Eastenders! She absolutely owned the role, and was as vicious, nasty (and utterly fabulous!) a Velma as I’ve seen. A very credible performance, and I would look forward to seeing her in any number of future productions now, purely on the basis of this one!

I do, however, want to give the biggest shout out to Wendy Somerville, who reprises her West End role as the Female Authority Figure, which is perhaps my favourite in the whole show! Whether she’s being Mrs Pingleton, the female prison warden, or the Dodgeball coach, she absolutely makes me roll in the aisles and I totally reckon that she has all the best lines, and an even better natural wit that she adds to the show.

Production wise, the sets and lighting were all fantastic, and though we detected a few mix problems in the sound, all but one occasion could likely be attributed to the fact that we were front row centre in a reduced Lyric Theatre, which had seen Rows A and B removed to make way for a larger, open, pit for the band. If we were sat a little further back, I’m sure the mix would have been just right.

The thing that may have made Max and I smile the most was that the Musical Director, whose name is not listed on the production website yet (boo!), spent the whole performance beaming and enjoying the production just as much as we all were. It was genuinely awesome to see someone enjoying his job, despite having worked on it for weeks, as much as those of us in the audience. Most of the time we caught him singing and dancing along with the cast, and his enthusiasm really was infectious.

A point that I would very much like to stress here – this is the VERY FIRST SHOW of this 2013 touring production (and consequently probably the first review of it in the World ever too!). So slick was this production you would think that they’d been rehearsing it for months, let alone weeks, prior to opening! It was as good as any production that I’ve seen on the West End stage, and full credit has to go to every single person involved in this show for the magic that they weave!

When this production comes to your local theatre, and without exception, you just have to go visit ‘The Nicest Kids In Town’, else you’ll find yourself ‘Without Love’, with a face full of ‘Cooties’, and (‘at the order of the Governor’, no less) locked in ‘The Big Doll House!‘

(Yes, dear reader, I did just shoe-horn those gems in there – sparkling like rained on hair-sprayed hair! :P).

I am determined to see the show again before it leaves town and embarks across the UK, and as a massive obsessive fan, can there be any simpler way for me to share my opinion of this production other than for me to implore you to go see it?

Oh, and Max says that if anyone from the production happens to be reading this review: “Why did you have to go make Gari sing loudly and ‘Hairspray’ dance in the street all the way home?! GAH!” haha!!!! ^_^

Hairspray is currently playing at the Lowry, Salford Quays until 23rd Feb 2013, before it continues to no doubt delight theatre-goers around the country. The show duration is 2 hours 30 minutes, including a 20 minute interval. For full listings, tickets and production information, please visit the official tour website.

My tweets from the night:

Hangin out with the nicest kids in town! #Hairspray (at @the_lowry) http://t.co/jIL6bQXq

1st night of the new @Hairspray2013 tour was absolutely mind-blowing and every bit as good as West End production. Front row centre! #fb

@DarkAeon @hairspray2013 thankyou for such a lovely review! So glad you enjoyed the show 😀