I SERIOUSLY cannot tell you guys just how much I want a pair of these, and have been longing for them since they were first announced… The Back To The Future Trilogy is like my holy mecca of films hehe!

“When the original Back to the Future creative team learned of Nike’s desire to support Fox’s foundation with the release of the 2011 NIKE MAG shoes, Executive Producer Frank Marshall joined the effort. A concept was hatched to develop a ‘Lost Scene’ to honor the original Back to the Future films and characters, capturing Doc Brown’s efforts to make Marty ‘fit in’ during his visit to 2015.

Original cast members Christopher Lloyd and Donald Fullilove reprise their beloved roles and actor Bill Hader and basketball star Kevin Durant join the Back to the Future legacy as store clerk and customer. The sales manager is played by original NIKE MAG designer and Vice President of Design at Nike, Tinker Hatfield, who also oversaw the development of the 2011 NIKE MAG shoe. Hatfield indifferently informs Lloyd he has landed in the wrong year and the power lacing NIKE MAG shoes he is seeking for Marty McFly won’t be available until 2015. The film was created in collaboration with Wieden + Kennedy and features :60, :90 and two-minute versions.

The first rechargeable footwear from Nike, the 2011 NIKE MAG shoes were designed to be precise replicas of the originals from Back to the Future II. The aesthetic is an exact match, down to the contours of the upper, the glowing LED panel and the electroluminescent NIKE in the strap. The only deviation from the original is additional foam support in the ankle and toe box for increased comfort. The 2011 NIKE MAG illuminates with the pinch of the “ear” of the high top, glowing for five hours per charge.

Nike has donated 1500 pairs of the 2011 NIKE MAG shoes to the Michael J. Fox Foundation for Parkinson’s research, which will be available on eBay at nikemag.eBay.com. Each day for the duration of the ten-day auction, one hundred and fifty pairs of the 2011 NIKE MAG shoes will be made available via eBay’s Fashion Vault, a differentiated platform for select designer and branded fashion events. The auction starts today and will end September 18. In addition, the shoes are listed using eBay Giving Works, the company’s innovative online philanthropy program that enables millions of people to easily connect with and donate to organizations they care about. The auction is managed by Auction Cause for the Michael J. Fox Foundation.”

Check out the shoes in detail here 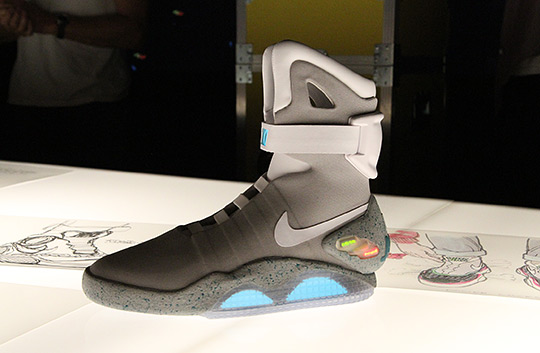