It’s not often that I come away from the theatre feeling as disappointed and glad to be out as I regretfully did tonight. 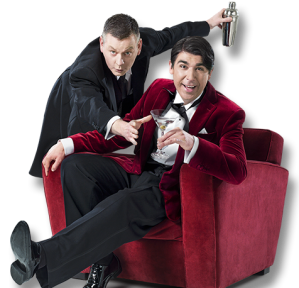 If you’ve seen the fantastic production of The 39 Steps, then you’ve basically seen the ‘fun’ bit of this – two out of the three characters playing a myriad of roles.

Admittedly this made it incredibly difficult to follow as some of the changes are quite quick and they keep on breaking the 4th wall, which, along with both a bizarre and banal story, quickly becomes too much to follow, and I found myself not really caring about ultimate outcomes.

My partner, Max, is a big Wodehouse fan and even he was asking at the interval if I really wanted to hang around for Act Two (I said yes, mainly as I always reason that I’d much prefer to see real actors rather than spending a much needed evening staring at actors on the telly!). Act Two was marginally more enjoyable than the first.

Audience age was pretty much all over 70 on a Wednesday evening performance – I’m 29 and saw nobody even remotely my age to be there, which was a shame.

Not quite sure how this won the 2014 Olivier Award for ‘Best Comedy’ – the humour in this production is SO contrived, it’s just awkward. I was expecting wit, not farce. I didn’t crack a smile once, and I’d say I’m usually ‘generously affable’.

It’s not all doom and gloom – the three actors were great in their individual roles, and they clearly work hard for their supper,  though it’s my opinion that Alice Power’s set was the real star of the show.